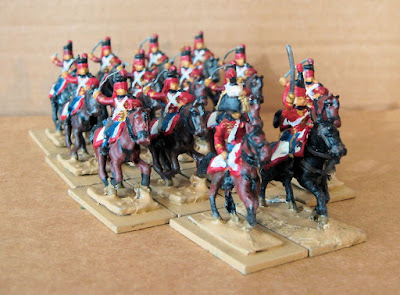 In the abysmal language of TV cooking shows, here are the French 7th bis Hussars done two ways - first with S Range figures, then with Lamming one piece figures (probably SYW ones) with an S Range officer and a Minifigs 20mm one piece casting of Murat.

As I mentioned in my previous post my Egyptian campaign forces on both side were overdependent on camel riders and noticeably short of horsed cavalry.

I found some dragoons for the French and then started on the S Range figures at the top.I have a unit of these on another post (can that really have been nine and a half years ago?). Anyway I believe the figure to be a Napoleonic British Hussar (troopers and officers) in Mirliton, though I haven't been able to find a code on any listing I have seen. It might just be the SYW Hussar (FSWC 2s) which is recommended for use in the French Revolution and Egyptian Campaign, but I think the shabraque etc is Napoleonic. I painted these according to the Knotel plate in Vol 1 of Elting's European Uniforms.

When I picked up a copy of Yves Martin's The French Army of the Orient 1798-1801 I found a completely different plate based on a reconstruction from a written description of a now lost plate by Hoffman.

I therefore thought I might field two units, one of each version. For the second I chose some (not terribly good) recasts of the lovely Lamming SYW one piece hussar, which came in at least two versions, with busby or with (as here) Mirliton. Some of these figures are waiting for sword replacement therapy.

Lamming also did a rather lovely dismounted hussar, kneeling firing. This came in at least two headgear variants - busby and shako - mine are pictured below. The standing figure is an S Range staff officer

Posted by Vintage Wargaming at 21:08

I'm just checking if your blog is still active: I've only just come across it, but it's full of invaluable information for helping identify a massive collection of ancient (in every sense) Minifigs.

As an expert on the Minifigs S Range, what is the availability of Napoleonic horses like? I am considering Warrior Miniatures for some armies but I am not very keen on their horses and S range look a reasonable replacement. 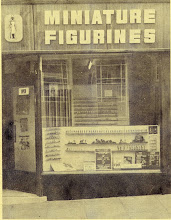